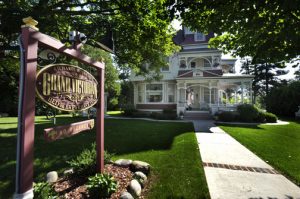 In 1893, a young man by the name of Henry Richardi began construction of what is now recognized by experts as one of the most perfect examples of Queen Anne Victorian Architecture.  A successful business man and owner of the Richardi & Bechtold Woodenware Factory of Bellaire, Henry put his heart and soul into the home that was intended for his German bride-to-be.  But, for reasons now lost to rumor, they never married.   Broken-hearted, Henry left the area, leaving his new home for future owners to enjoy.  Since Henry left the home, the “1895 Richardi House” has been blessed with owners who have immaculately maintained the home in its original form.  In 1978,the home’s authenticity was acknowledged through its addition to the U. S. Department of the Interior’s National Register of Historic Places.  The general public has been able to access the home since 1989, when it became the “Richardi House Bed and Breakfast Inn”.  Then new owners performed a major renovation beginning in 1991 renaming the home “Grand Victorian Bed and Breakfast Inn”. Now, honored guests have an opportunity to spend time in this unique home and absorb the expert craftsmanship that Henry originally had intended for his young bride.

The U.S. history of the Richardi family begins in 1859 when Henry’s father, Robert Richardi, brought his young bride Louise to the U.S. from Germany.  Robert spent a year serving in Pennsylvania’s 177th Infantry.  Discharged in 1862, he moved to Ohio and then to Missouri where he established a clothes pin making factory.  Having patented several wood designs and tools, he was already developing quite a reputation and sizable revenue.

Around 1881 Robert partnered with Fred Bechtold and moved to Bellaire to purchase property from the local railroad and build a large woodenware factory.   The venture became very successful, employing 145 people and pumping $80,000 per year into the local economy – a lot of money in those days!

NOTE: All images and information were borrowed directly from the Grand Victorian Bed and Breakfast website. Please visit them at http://www.grandvictorian.com/index.htm.  They will be glad you stopped by!

Need to Fly Out this Week? Check out our Last-Minute Deals with Expedia!